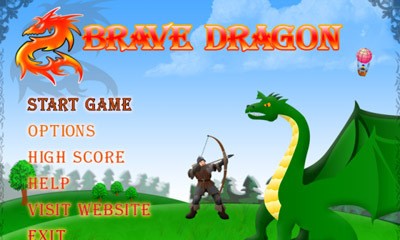 Name of the Game: Brave Dragon
Category: Adventure Games
Description: There were times when dragons ruled the World. Those were times when a trifle of people coexisted peacefully with dragons. However, people had started to gather in tribes, to be lead by chiefs, thus posing a threat to dragons. Now power and strengths of one dragon wasn't enough to defeat one tribe. Very often when a tribe attacked a dragon, they came out the winners. So very soon humankind population had risen greatly. Nevertheless, dragons and people lived freely without impeding each other much. One day people discovered the source of energy unknown before. With the course of time they learned how to use it. It was giving the magic power. During the Worlds Chiefs Gathering the decision was made to exterminate all the dragons with the help of this power, so that they could alone own the Earth. Having learned the treacherous plans of people, dragons decided to send out the best warrior dragons. By demolishing the main source of energy they could safe their lives. You control one of these fearless dragons. Your main aim is to fly as far as the main source and demolish it. The main problem is the net that is following you, if you get closer, you're trapped. Besides the net, there are many other obstacles on your way. But different bonuses could help you.